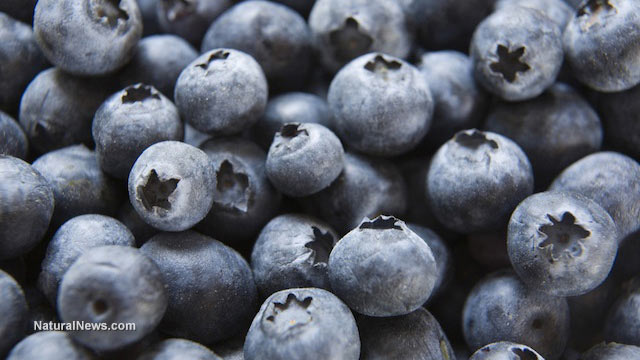 (NaturalNews) Up until a few decades ago, blueberries didn’t have the superfood status they rightfully claim now. As a matter of fact, they were considered lacking in nutrition. Since then, serious testing and analysis have proven blueberries are truly tasty, medicinal foods.

Blueberries are native to North America. The American Indians, who used them as food and medicine, showed early Massachusetts European colonists the bushes containing them. Prior to that, Europeans only knew of blueberries’ cousin – bilberries.

Although fresh blueberries are considered the best way to go, it’s been proven that fresh frozen blueberries also have the same antioxidant capabilities as fresh blueberries, possibly more. [1] But you might make sure the package feels loose, indicating they were not thawed and refrozen after their original freezing.

The recommended consumption level is around a half-cup to a cup daily, without added milk and sugar, which interfere their intrinsic health values. But as usual, the studies that determined milk was detrimental did not consider raw milk. After all, it is illegal and thus non-existent in the minds of most researchers. [2]

Every day may be too ambitious for most of us. But a major epidemiological survey determined that consuming blueberries three days a week was enough to reduce heart health risks by one-third. [3]

Two recent studies over the past couple of years, one at Florida State University (FSU) [4] and the other at Appalachian State University in North Carolina (NC) [5] very thoroughly analyzed the results of blueberry extracts on humans using blueberry powder extracts in random double blind testing.

The most modern state of the art device for measuring arterial stiffness was used at FSU, and both studies supported the following attributes of consuming blueberries:

Nitric oxide in blood levels was increased up to 68%, dilating blood vessels to accommodate easier blood flow, which in turn lowers blood pressure (BP) or hypertension.

After eight weeks, women in the FSU study experienced an average reduction of 5.1% with their systolic reading, the top number indicating pressure from the heartbeat, and a 6.8% lower diastolic reading, the lower number that indicates BP between heartbeats.

The same postmenopausal women in the FSU study experienced a 6.5% reduction in arterial stiffness, a symptom of arteriosclerosis. The NC study used both men and women with sedentary life styles with similar results after six weeks of using blueberry extract powder.

And that study also showed that natural killer (NK) cells of foreign invaders, including excess cancer cells, were increased significantly. [6]

They tested rats that were equivalent in age to humans at 65 to 70 years and challenged them with memory response and neuromotor regimens. By the end of 10 weeks of testing, rat ages were in the 70 to 75 year range of human equivalency.

Brain tissues examined after their deaths showed higher levels of dopamine in the blueberry rats. And another Tufts study soon after revealed the mechanism for protecting brain cells from damage, the heat shock protein, remained intact in older blueberry fed rats after inflammatory stimuli. [8]

About the author:
Paul Fassa is dedicated to warning others about the current corruption of food and medicine and guiding them towards direction for better health with no restrictions on health freedom.

You can check out his many non-compromising cutting edge, non-fluff articles here http://www.naturalnews.com/Author712.html

And you can visit his blog at http://healthmaven.blogspot.com