Third Leading Cause of Death in America: Going to the Hospital

Before the 20th century, the average person would only go to the hospital as a last resort. That’s because hospitals were where you went to die. They were unhygienic hell holes staffed by unprofessional doctors who knew as much about medicine as you or I know about nuclear physics. Even when a healthy person was admitted to a hospital, there was a really good chance that they weren’t coming out alive. 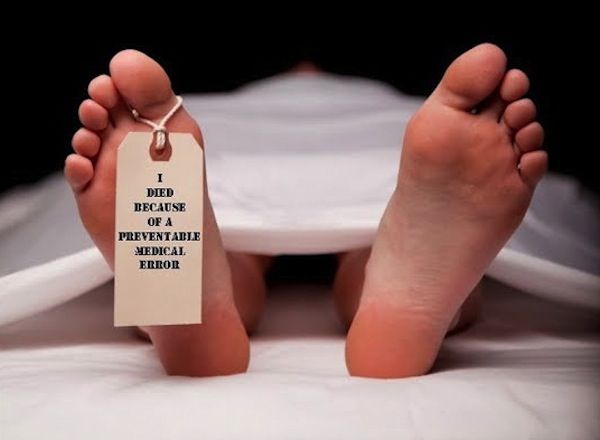 A lot has changed since those dark days, but there are still plenty of ways to die in a hospital that are very preventable. In fact, so many people die from “medical errors” in our hospitals, that it’s become the third leading cause of death in America. It outranks car accidents, murders, and suicides put together, and by a wide margin. It’s only surpassed by cancer and heart disease as the leading causes of death. According a report published by The BMJ, over 250,000 people die from medical errors every year. They define these errors as:

“An unintended act (either of omission or commission) or one that does not achieve its intended outcome, the failure of a planned action to be completed as intended (an error of execution), the use of a wrong plan to achieve an aim (an error of planning), or a deviation from the process of care that may or may not cause harm to the patient.”

And the true number of deaths could be much higher. “Medical error” isn’t something that shows up on death certificates, and the people who do die from these mistakes are just the individuals that we know about.

While the study doesn’t mention this, there shouldn’t be any doubt that at least some of these numbers are related to America’s prescription drug epidemic. Americans are prescribed more drugs than anyone else on the planet, and while estimates vary, the deaths that are related to these prescriptions number in the tens of thousands. The statistics surrounding opioid drugs alone are harrowing.

Approximately 4,263 deaths were linked to opioid overdoses in 1999, but that number had climbed to 17,000 in 2011, and didn’t include those from benzodiazepine drugs such as Xanax and Klonopin. The numbers could be even higher because specific drugs weren’t named in about 25% of all drug deaths. The greatest increase in death rates occurred in Americans between 55-65 years old.

“The amount that [opioids] are administered by well-meaning physicians is excessive,” said Dr. Robert Waldman, an addiction medicine consultant not involved with the research. “Most physicians are people-pleasers who want to help and want to meet people’s needs, and they are more inclined to give people the benefit of the doubt until you are shown otherwise.”

Unfortunately, there’s no reason to believe that these numbers will fall in the near future. Between the proliferation of socialized medicine (which results in fewer doctors who are under more stress, and thus, make more mistakes), the rise of superbugs, and doctors who give out drugs like candy, someday soon going to the hospital may be just as hazardous for your health as it was before the 20th century.

Delivered by The Daily Sheeple

We encourage you to share and republish our reports, analyses, breaking news and videos (Click for details).

Contributed by Joshua Krause of The Daily Sheeple.

Joshua Krause is a reporter, writer and researcher at The Daily Sheeple. He was born and raised in the Bay Area and is a freelance writer and author. You can follow Joshua’s reports at Facebook or on his personal Twitter. Joshua’s website is Strange Danger .