Why Michelangelo Painted Ezekiel on the Sistine Chapel Ceiling So Muscular 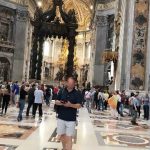 Ezekiel Diet Note: This was a lost blog post from May 2017 I made after returning from a couple weeks in Italy. It was lost in a suspicious server crash in December 2017.

I’ve thought about this blog post often and regretted losing it. I found an old backup of the site recently and rescued this text from thousands of pages of programming.

Why Michelangelo Painted Ezekiel on the Sistine Chapel Ceiling So Muscular

I always wondered why Ezekiel was painted so muscular by Michelangelo on the Vatican Sistine Chapel (above right), even at an advanced age indicated by his gray hair. He’s built like a body builder.

Notice the painting of Ezekiel (pictured above right) and on the Sistine Chapel ceiling (pictured below).  He has a hint of huge pectoral chest muscles, his robe pulled around his waist almost intentionally indicating he doesn’t have a gut, with massive neck, forearms, and legs.

In 2017 I vacationed in Italy and discovered exactly why Michelangelo painted Ezekiel on the Sistine Chapel ceiling so muscular.

The stories surrounding the discovery of the Laocoön statue on display at the Vatican Museum helped me understand why Michelangelo (portrait bust center above), painted Ezekiel this way.  It’s because he was influenced by the male physique style of the Laocoön statue pictured above on the left. See excerpts below from Wikepedia that correspond to what I heard in a 2017 tour at the Vatican Museum.

I also understand Michelangelo wasn’t happy about the Sistine Chapel project or the pay, or lack of pay. More than once he walked off the job and went back to Florence. The Pope had to threaten to attack and destroy Florence if he didn’t come back and finish the job. 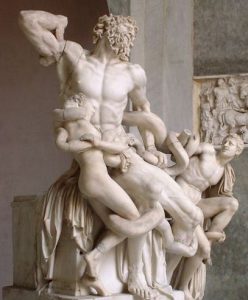 Laocoön and His Sons

The Laocoön group was unearthed in February 1506 in the vineyard of Felice De Fredis; informed of the fact, Pope Julius II, an enthusiastic classicist, sent for his court artists. Michelangelo was called to the site of the unearthing of the statue immediately after its discovery,[35] along with the Florentine architect Giuliano da Sangallo and his eleven-year-old son Francesco da Sangallo, later a sculptor, who wrote an account over sixty years later:[36]

The first time I was in Rome when I was very young, the pope was told about the discovery of some very beautiful statues in a vineyard near Santa Maria Maggiore. The pope ordered one of his officers to run and tell Giuliano da Sangallo to go and see them. So he set off immediately. Since Michelangelo Buonarroti was always to be found at our house, my father having summoned him and having assigned him the commission of the pope’s tomb, my father wanted him to come along, too. I joined up with my father and off we went. I climbed down to where the statues were when immediately my father said, “That is the Laocoön, which Pliny mentions”. Then they dug the hole wider so that they could pull the statue out. As soon as it was visible everyone started to draw (or “started to have lunch”),[37] all the while discoursing on ancient things, chatting as well about the ones in Florence.

The discovery of the Laocoön made a great impression on Italian artists and continued to influence Italian art into the Baroque period. Michelangelo is known to have been particularly impressed by the massive scale of the work and its sensuous Hellenistic aesthetic, particularly its depiction of the male figures. The influence of the Laocoön, as well as the Belvedere Torso, is evidenced in many of Michelangelo’s later sculptures, such as the Rebellious Slave and the Dying Slave, created for the tomb of Pope Julius II. Several of the ignudi and the figure of Haman in the Sistine Chapel ceiling draw on the figures.[50] Raphael used the face of Laocoön for his Homer in his Parnassus in the Raphael Rooms, expressing blindness rather than pain. [51]

From Wikipedia, the free encyclopedia:   https://en.wikipedia.org/wiki/Laoco%C3%B6n_and_His_Sons