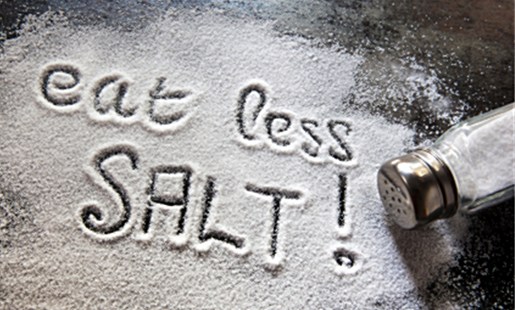 Everyone may not agree with sodium as my #2 food ingredient to avoid. And some people thrive on excessive sodium and need it for good health. Consult with your physician about your particular requirements for sodium.

My focus here is on the excessive amounts of cheap, over-processed table salt in most processed food and fluid retention. The processed food supply, as well as ALL restaurant food, with fast food being particularly egregious, is absolutely saturated in extreme amounts of sodium to increase shelf life and guard against the possibility of food poisoning, as well as enhance taste.

This was a huge key point I missed for the first 50 years of my life and I regret it terribly. I have no doubt that I’m capable of carrying dozens of pounds of fluid from excessive sodium in my diet. When I say dozens I mean between 30 and 50 pounds. I’m convinced that’s how I was able to lose a pound a day for the first 45 days on the Ezekiel Diet. It had to be mostly fluid. The Atkins diet does the same thing to most people if it’s fresh food that’s also low in sodium. But fresh meat, vegetables, and fruit doesn’t include: restaurant food, most canned fruit and vegetables, or frozen and/or processed meat, and fast-food. See 128 Ezekiel Diet fresh food 400 calorie meal ideas HERE.

Most high blood pressure is directly related to excessive sodium in the diet. The average American is consuming 10,000 to 20,000 mg of sodium a day when about 500 mg is all that’s needed by the body. And that’s without ever picking up a salt shaker and adding any sodium. It’s hard to keep sodium under 1,000 mg a day as meat, eggs, fruit, and vegetables, and just a few low sodium condiments will easily consume 1,000 mg. I work at keeping my sodium intake under 2,000 mg a day which isn’t easy and takes careful decisions on condiments, sauces, and dressings. Most of the condiments I blog about here fit this under 2,000 mg of sodium a day lifestyle.

My blood pressure was 200/100 at about age 45 when it was first diagnosed as high, and I was only able to get it down to about 145/95 while still consuming sodium polluted processed food and taking BP medications.

I believe my mother passed on a sensitivity to processed sodium (table salt, not Real or Himalayan Sea Salt) that I was unaware of until several years ago. My mother was big most of her life. She took prescribed diuretic  and potassium tablets for as long as I can remember. I was also chubby as a child and as I got older I also had a weight problem.

I couldn’t understand why the Atkins diet wouldn’t work for me while eating processed food. Here’s what I used to do. In the morning I would grab two sausage egg McMuffin sandwiches without cheese, and a large coffee. Take it to the office, throw the buns away and eat the 2 eggs and sausage with a fork and knife. The sausage, eggs, AND the coffee at McDonalds is extremely polluted with sodium. So much sodium the meat could qualify as cured and last on the shelf indefinitely. Then for lunch I would go to a food bar like Golden Coral and have grilled chicken or fish and vegetables. The vegetables were from a can I’m sure and extremely polluted with sodium. The meat probably came from a behemoth processed food wholesaler and had 5 to 10 times the sodium found in fresh cleaner brands of chicken or fish at the grocery store. I would maybe have a salad and pollute it with the food bar’s salad dressings (where low calorie means nothing), that you can bet contain excessive levels of sugar, sodium, and/or HFCS, and plenty of MSG. This is the case for almost all commercially available salad dressings. Eat a healthy salad at a restaurant with polluted salad dressing and gain 2 lbs the next day from fluid retention, that was my experience. Notice you almost never hear of food poisoning at restaurants anymore. I believe that’s partially due to extreme amounts of sodium in everything at restaurants. I was completely frustrated that I wasn’t losing any weight carefully choosing food off restaurant menus.

This sodium problem is what led me to start buying into the Biggest Loser lie that the only way I would ever lose weight was by committing to a grueling basic training workout regimen for the rest of my life. I now know that only worked because it caused me to sweat off excessive fluid retention from way too much sodium.

I believe many, many Americans suffer from this fluid blob syndrome. Don’t discount it, it’s a huge problem today. The only way I got control of this problem was by buying and preparing my own food fresh every day. I limit dining out to just once a week and then I have to spend a couple days dropping the extra couple pounds I can gain from eating just one meal out.  I’m referring to even nice restaurants where highly educated idiot chefs oblivious to this problem are serving sodium polluted food. They have no idea that what appears to be fresh food is absolutely polluted with extreme amounts of sodium to guard against food poisoning and protect the restaurant from spoilage. I don’t eat at fast food restaurants period, because it’s easily multiple times worse than restaurant sodium polluted food. Most fast food doesn’t even qualify as food in my thought process anymore. I call it crack-food for bloated-fluid-blob-slob-idiots. Bless their hearts.

I was a fluid blob from all the excessive sodium I consumed in most of the  processed food I was eating until a few years ago. It made my life miserable.  I see sodium fluid blob slobs everyday and everywhere I go. When I see a overweight person sweating profusely when everyone else is comfortable, I know exactly what the problem is and it bothers me to keep quiet and not share what I know. And maybe save them from all the years I lost not understanding this problem. If you can sweat standing still while everyone else is comfortable that’s your body trying to push excessive fluid retention right out through the pores in your skin. If you’re just turning the air conditioning down lower you’re actually working against your body’s natural process trying to save your life.

This problem with profuse sweating all the time from excessive sodium-caused fluid retention (unless the temperature is 70 degrees or lower) can make life miserable. I never took up golf because I would be soak and wet from sweat by the 3rd or 4th hole. It’s one reason I worked hard early in life to get into sales and management inside with the air conditioner. It’s a terrible way to live.

I remember hearing Richard Nixon had this same problem and I know it worked against him in that famous televised debate he had with JFK. He started sweating from all the bright lights and stress while JFK appeared cool and calm. It cost him that debate. He should have went on a low sodium fresh food diet and flushed all that fluid retention and dropped his heart rate at least a week before that debate.

My resting heart rate can go down to 100/55 and I now enjoy extreme heat, if dressed properly.

What I found absolutely fascinating is that Real brand Sea Salt or Himalayan Sea Salt with all the minerals doesn’t cause me to retain excessive fluid. Real Salt brand pink sea salt
I’m extremely sensitive to heavily processed regular table salt, and salt (sodium chloride) in extreme amounts in all processed food, and especially in restaurant food. It causes me to bloat dozens of pounds of fluid. My blood pressure skyrockets to 200/100 and even 145/95 on BP meds while still eating processed food. But, and this is very interesting, I’m not sensitive to Real Salt with all the intended minerals. Real Salt comes from an ancient underground sea bed in Central Utah, where for more than 30 years they’ve delivered completely natural sea salt — nothing added, nothing taken away, completely protected from pollution. That means you get more than 60 trace minerals in a delicious, healthy salt that is never chemically treated, bleached, or kiln dried.