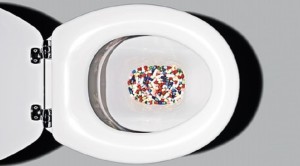 (NaturalNews) If you drink tap water, there’s a good chance you’re taking in all sorts of pharmaceutical drugs at the same time. Massive doses of prescription drugs pass through people’s bodies and into the sewage system. These chemicals are very stable and make their way back into the water supply, unchanged. If you don’t use appropriate, lab-validated water filters, you could be drinking a bizarre cocktail of drugs on a daily basis. Without even knowing it, you could be taking birth control, statins, SSRIs, psychotics, or any other popular chemical that is now pervasive in the water supply. These second hand medications could be interfering with your hormones, weight modulation, sleep patterns, temperament, cognitive function, ability to handle stress, etc.

We are all being drugged up through the tap

Not only are people dumping unused and outdated prescriptions down the sewage system, the pills they take also remain stable, even after passing through their bodies. With nearly half of men and women in England now taking prescription drugs on a regular basis, significant amounts are destined to remain active, ultimately resurfacing in tap water.

As more Americans increase their intake of pharmaceuticals, the amount left over in the water supply will only increase, adversely affecting others who choose not to take them. Antidepressants, painkillers, and statins are among the most popular prescribed medications and these all have known side effects. What happens when the human population is slowly inundated with a random cocktail of these drugs over time? What do these left overs do to the developing fetus? Are birth defects increasing due to silent pharmaceutical poisoning of their developmental process?

Skeptics have long thought that once the pharmaceutical passes through the body, it becomes inert. John Sumpter, professor of ecotoxicology at Brunel University London, says otherwise, “When they get into the water system they retain their powerful biological activity.”

That “biological activity” may randomly interfere with the normal organ processes of unsuspecting people. On top of that, heavy metals in the drugs —which are often used as catalysts to speed up chemical reactions – can do further damage to people’s organs and tissues.

Dozens of pharmaceuticals found in US rivers

A study published in Environmental Science and Technology Letters published water analysis data from 59 small US streams. In the water there were 108 pharmaceuticals. One river actually contained 45 different drugs, including muscle relaxant methocarbamol, opioid painkiller tramadol, and the anti-epileptic drug carbamazepine. In nearly every sample, the anti-diabetic drug metformin was found.

This pharmaceutically-tainted water makes its way onto crop fields as well. A study from the Hebrew University of Jerusalem found that crops irrigated with wastewater passed on significant levels of the epilepsy drug carbamazepine. The chemical was detected in the urine of those who ate the crops.

“We don’t know what it means if you have a lifelong uptake of drugs at very low concentrations,’ says Dr. Klaus Kuemmerer, professor of sustainable chemistry at Germany’s University of Luneberg. The negative effect could be more pronounced in children. Over time, a miniscule amount of several drugs could have an effect on adults too, especially due to intermixing effects. One of the most worrisome class of drugs often detected are psychoactive drugs. These are known to elicit unpredictable and suicidal behavioral changes in people.

The only surefire way to protect your body and your mind is to invest in a scientifically validated water filtration system that removes heavy metals and pharmaceutical chemicals from the tap.