(NaturalNews) Everybody ages, but not everyone ages equally. The tick of our chronological clock doesn’t always match the tick of our biological clock. And although aging is inevitable, a group of Canadian researchers claim to have discovered the six best natural compounds that can slow down the aging process and boost longevity.

In the recent study, published in the journal Oncotarget, researchers from Concordia and the Quebec-based biotech company Idunn Technologies conducted more than 10,000 trials screening for plant extracts believed to increase the lifespan of yeast.

Yeast is the most common organism studied in anti-aging research. From a cellular viewpoint, yeast ages in a similar way to people. It is one of the best models to understand how aging occurs.

The impact of extracts

“In total, we found six new groups of molecules that decelerate the chronological aging of yeast,” Vladimir Titorenko, senior author of the study and professor in the Department of Biology at Concordia, said in a press release. The extracts were derived from Cimicifuga racemosa, Valeriana officinalis L., Passiflora incarnata L., Ginkgo biloba, Apium graveolens L. and Salix alba. 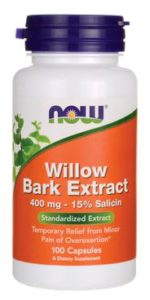 The researchers described one of these groups of molecules, a specific extract of willow bark (Salix alba), as “the most potent longevity-extending pharmacological intervention yet described in scientific literature.” In particular, the study found that the willow bark extract increased the average chronological lifespan of yeast by 475% and maximum chronological lifespan 369%.

“Rather than focus on curing the individual disease, interventions on the molecular processes of aging can simultaneously delay the onset and progression of most age-related disorders. This kind of intervention is predicted to have a much larger effect on healthy aging and life expectancy than can be attained by treating individual diseases,” noted Idunn Technologies founder Eric Simar.

If the results of the study can be replicated in an organism other than yeast, then these compounds could prove to be more effective than anti-aging drugs like rapamycin and metformin.

In addition to fighting the aging process, these compounds could prevent diseases related to aging, like cancer, note the researchers. “These results also provide new insights into mechanisms through which chemicals extracted from certain plants can slow biological aging,” said Titorenko.

“These six extracts have been recognized as non-toxic by Health Canada, and already exhibit recognized health benefits in humans,” said Simard.

“But first, more research must be done. That’s why Idunn Technologies is collaborating with four other universities for six research programs, to go beyond yeast, and work with an animal model of aging, as well as two cancer models,” Simard added.