As seen at Longevity, Health, Wellness, and Inspired Aging Blog

In one of my favorite Boulder restaurants, The Kitchen Upstairs, I have found a deliciously devilish treat that I have indulged in a time…or two…or three–well, who’s counting?  In fact, it’s gotten hard to walk into that place without salivating, thinking about the little “Pot au Chocolait” that they serve. While it appears to look like a cake on the outside, it is actually a flourless orgasmic blend of rich chocolate, butter, eggs, sugar and milk. Inside it is a molten delight of gooey, warm, joy. These little rascals are easy to whip up, quick to bake, and bring sheer ecstacy to most everyone who bites into them.

So I set forth on a quest to find a similarly delightful recipe and I think I have found it. Before you indulge in this guilty pleasure, let me lighten that guilt just a tad by telling you a few of the healthy, antiaging benefits of chocolate.

One of the biggest and most important reasons to make chocolate a part of your diet on a regular basis is because of the heavy-hitting antioxidants it contains. In fact, scientific research is has compiled evidence that links chocolate to over forty health and antiaging benefits.

These powerful antioxidant polyphenols in chocolate are so valuable, becasue they contain the ability to stop free radical-mediated oxidation. This helps to decrease your risk of all those chronic aging diseases like heart disease, cancer, strokes, Alzheimer’s and more, by directly interfering with one of the major preventable causes.

And interesting tidbit from the ACS’s Journal of Agricultural and Food Chemistry states that naturally-occurring polyphenols in cocoa, the fundamental component in chocolate, actually boost levels of HDL, the “good” cholesterol, while at the same time reducing the danger of so-called “bad” variety – LDL – by preventing its oxidation. Supporting evidence from the Cleveland Clinic study noted:

“Antioxidants are believed to help the body’s cells resist damage caused by free radicals that are formed by normal bodily processes, such as breathing, and from environmental contaminants, like cigarette smoke. If your body does not have enough antioxidants to combat the amount of oxidation that occurs, it can become damaged by free radicals. For example, an increase in oxidation can cause low-density lipoprotein (LDL), also known as ‘bad’ cholesterol, to form plaque on the artery walls.”

There’s a chemical called anandamide, which is a neurotransmitter produced in the brain that temporarily blocks feelings of pain and depression. This chemical is activated when you eat chocolate. Derived from an ancient Sanskrit word for “bliss”, it is an accurate description for the feeling that many chocoholics pursue in their love of chocolate.

Daniele Piomelli, a food scientist from the University of California, Irvine, explains it this way:

“Anandamide is …synthesized in areas of the brain that are important in memory and higher thought processes and in areas that control movement. That implies that anandamide’s function is not just to produce bliss.“

There’s also evidence that this compound has the ability to help “sweeten” up your love life as well. Natural stimulants in chocolate produce a boost in both physical and brain energy, primarily from caffeine and theobromine. In fact, one clinical study showed positive effects on cognition and mood, as well as lowered blood pressure. And, everyone knows chocolate contains caffeine, a stimulant that can help heighten physical energy and alertness, but studies also show that it can inhibit inflammation in the brain and fights aging.

Using microwave or a bowl set over pan of simmering water, melt chocolate with butter, stirring occasionally, until melted and smooth. Remove from heat.

While chocolate is melting, whip eggs, sugar, and salt using mixer fitted with whip attachment on medium-high speed until mixture is lightened and fluffy, about 5 minutes.

Reduce speed to low and mix in chocolate mixture until combined. Spoon into cups and place on baking sheet. Bake until edges are set but center is underdone and still the consistency of pudding, about 10-12 minutes. Avoid over-baking. Let cool 3 minutes and serve with (optional) whipped cream, fresh cream and a touch of powdered sugar sprinkled on top.

Catherine (Cat) Ebeling is an RN, BSN (Bachelor of Science in Nursing) with a background in physical therapy and over twelve 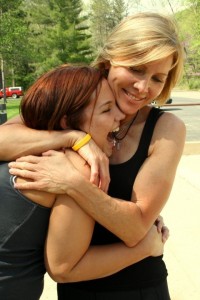 years in the fitness business.

After learning that she had several food allergies at the age of 20, as well as celiac disease–an often serious autoimmune disease of the GI tract in which the body attacks the digestive system, she set out to look for solutions. Undiagnosed celiac disease can lead to severe malnutrition, osteoporosis, anemia and many other serious diseases, including cancer.

Not willing to sit around waiting for this grim prediction to become a reality, she studied every nutrition and diet book available in search of the answers to her health problems.

Cat has had more than thirty years of intense study in diet, nutrition, disease and natural alternatives to drugs for health issues. As a part of the medical community herself, it became very clear that there was a lot of ignorance among doctors and her peers in regard to nutrition and health, so she often became a resource for both doctors, other nurses, and patients for their dietary concerns.

Through the study of diet and health, as well as her work as a fitness professional , she has learned tried and true ways to lose weight, look great, feel young and have tons of energy.

And her best-selling ebook, “The Fat Burning Kitchen; Your 24 Hour Diet Transformation to Turn Your Body into a Fat-Burning Machine”, co-authored with health and fitness specialist Mike Geary, is popular the world over.

In it, she explains how many so-called health foods are actually bad for your health and cause weight gain. And she discusses how some surprisingly healthy foods are often avoided, even though they are some of the best fat-burning foods around.

This “simple, smart, nutrition” approach has created real results for many people.

In addition, through her intensive study of diet, health and nutrition,she has helped many people overcome their health issues and avoid harmful medications and the resulting negative side effects.