The Average Physical Condition of 4,100 Passengers on a Cruise Ship

I recently returned from a cruise.  Because I blog about weight and health issues I was particularly aware that at least 70% of the approximate 4,100 passengers were obese. The remaining 30% were mainly children, teens, college age, and the occasional middle/older aged thinner anomaly. The obesity problem has reached epidemic levels in society if this group of people is an average sample of Americans. The picture of passengers above isn’t the cruise I was on but it’s a good example of what I saw everywhere.

Once again I came back from a cruise with no weight gain. I did that by: 1)  took all my normal supplements daily including a good 50 billion probiotic, 2) walked 30,000 to 40,000 steps a day all over that ship and Bermuda,  3) avoided bread, pasta, soft drinks, drinks, cake, muffins, and starchy desserts, 4) consumed plenty of fruit and vegetables, 4)  just an occasional wine or beer with a meal, mostly Pellegrino sparkling water with meals, 5) drank plenty of Evian bottled water, 6) took a diuretic to offset sodium, 7) took the stairs instead of the elevator a couple times a day, (limited to 6 decks, didn’t want to push it in the middle of the Atlantic : ) 8) ate normal high quality meals and didn’t gorge just because food was everywhere.

One thing I do indulge in are desserts onboard. My weakness is cheesecake or fruit pies, maybe pecan pie  One thing I’ve noticed is cruise ships don’t use a lot of sugar in their desserts. It’s just enough to be OK, but not so sweet the land whales stand in line for it or order double servings at dinner.

While sitting in the crowd waiting for one of their shows to start I could scan aisle after aisle of passengers who weren’t just a little overweight, they were obese. I have considered cruise ships attract overweight big-eaters who take glutenous food gorging vacations. It’s been reported that the average cruise passenger gains a pound a day.

While reviewing hundreds of other pictures of cruise passengers from thousands of photos on a Google Image Search I personally believe the obesity epidemic is getting worse, very fast.  Especially in the ages between 30 and 60. 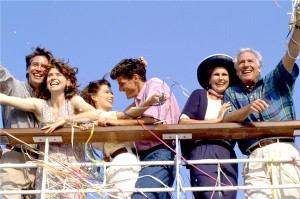 Of course most people have been conditioned from years and years of cruise ship marketing material and advertisements to believe cruise passengers look like the thin models in this promotional picture.

The younger ages seem to fare much better grazing on the contaminated processed food supply. But by about age 30 it looks like the body starts to become overwhelmed. Whatever protected the younger ones, whether it’s growth hormones, a newer body with fresh organs, strong liver, different metabolism while growing, whatever, it must start to wane after age 30.  Then they balloon out quickly.

I wondered is it because they’re all just oblivious to the problems with today’s contaminated processed food supply? Or, was it because they just don’t care? Or, is it the end result of huge conglomerate food processors employing tested R&D in sugar, salt, MSG, and chemical addiction technology en masse on the population? Whichever it is, the average person hasn’t found a motivating reason to care about their general physical condition. They’re in a slow eugenics death spiral as willing participants in the Multi-Million Dollar Medical Early Demise Tax Scheme.

Another interesting observation, several years ago about 95%+ of the ship’s crew members (all foreign) were slender, and at or below ideal body weight. Similar to the wait staff person in the middle of the big picture above. However, on this cruise I noticed many of the foreign staff were also overweight including many of the women in shops and coordinating events onstage.

The future in a cartoon image: