Is Cooking With an Air Fryer Healthy? 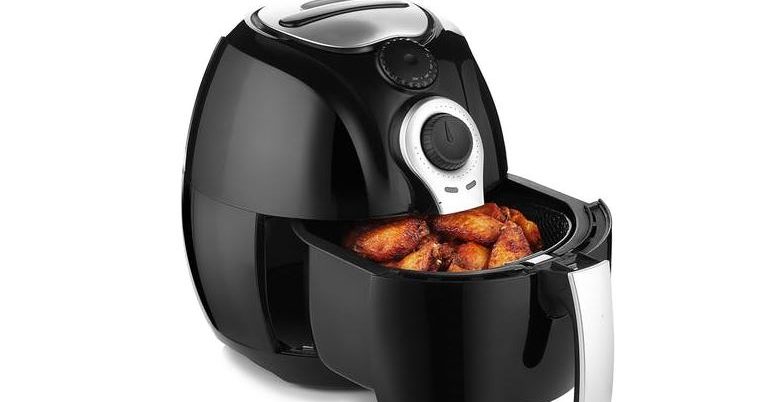 Advertised as a healthy, guilt-free way to enjoy your favorite fried foods, air fryers have experienced a recent surge in popularity.

They are claimed to help lower the fat content of popular foods like french fries, chicken wings, empanadas and fish sticks.

But just how healthy is cooking with an air fryer?

This article will take a look at the evidence and determine if the benefits of using an air fryer really outweigh the risks.

What Is an Air Fryer and How Does It Work?

An air fryer is a popular kitchen appliance used to make fried foods such as meat, pastries and potato chips.

It works by circulating hot air that contains fine oil droplets around the food to produce a crunchy, crispy exterior.

This also results in a chemical reaction known as the Maillard effect, which occurs between an amino acid and a reducing sugar in the presence of heat. It leads to alterations in the color and flavor of foods (1).

Air-fried foods are touted as a healthy alternative to deep-fried foods, thanks to their lower content of fat and calories.

Instead of completely submerging the food in oil, air-frying requires just a tablespoon of oil to achieve a similar taste and texture to deep-fried foods.

Summary Air fryers are kitchen appliances that fry foods by circulating hot air around the food. Air-fried foods are believed to be healthier than deep-fried foods because they require less oil to produce a similar taste and texture.

For example, a chicken breast that has been fried contains about 30% more fat than an equal amount of roasted chicken (2, 3).

Some manufacturers claim that using an air fryer can cut the fat content of fried foods by up to 75%.

This is because air fryers require significantly less fat than traditional deep fryers. While many recipes for deep-fried dishes call for up to 3 cups (750 ml) of oil, air-fried foods need only about 1 tablespoon (15 ml).

This means that deep fryers use up to 50 times more oil than air fryers and, while not all of that oil is absorbed by the food, using an air fryer can significantly cut down on the overall fat content of your food.

One study compared the characteristics of deep-fried and air-fried french fries and found that air-frying resulted in a final product with substantially less fat but a similar color and moisture content (4).

This can have a major impact on your health, as a higher intake of fat from vegetable oils has been associated with an increased risk of conditions like heart disease and inflammation (5, 6).

Summary Air fryers use less oil than deep fryers and can produce foods that have a significantly lower fat content.

Switching to an Air Fryer May Aid in Weight Loss

Deep-fried foods aren’t just higher in fat, but they’re also higher in calories and may contribute to weight gain.

One study of 33,542 Spanish adults found that a higher intake of fried foods was associated with a greater risk of obesity (7).

If you’re looking to trim your waistline, swapping your deep-fried foods for air-fried foods can be a good place to start.

Clocking in at 9 calories in every gram of fat, dietary fat contains over twice as many calories per gram as other macronutrients like protein and carbohydrates.

Because air-fried foods are lower in fat than deep-fried products, switching to an air fryer may be an easy way to cut calories and promote weight loss.

Summary Air-fried foods are lower in fat than deep-fried foods, which may help reduce calorie intake and promote weight loss.

Air Fryers Can Decrease the Formation of Harmful Compounds

In addition to being higher in fat and calories, frying food can create potentially dangerous compounds like acrylamide.

Acrylamide is a compound formed in carbohydrate-rich foods during high-heat cooking methods like frying (8).

According to the International Agency for Research on Cancer, acrylamide is classified as a “probable carcinogen,” meaning that some research shows that acrylamide may be linked to the development of cancer (9).

Although the results are mixed, some studies have found an association between dietary acrylamide and an increased risk of kidney, endometrial and ovarian cancers (10).

Air-frying your food instead of using a deep fryer may help lower the acrylamide content of your fried foods.

In fact, one study found that air-frying reduced acrylamide by 90% compared to traditional deep-frying (11).

However, it’s important to note that other harmful compounds may still be formed during the process of air-frying.

Aldehydes, heterocyclic amines and polycyclic aromatic hydrocarbons are all other potentially dangerous chemicals that are formed with high-heat cooking and may be associated with a higher risk of cancer (12).

Further research is needed to determine how air-frying may impact the formation of these compounds.

Summary Using an air fryer can reduce dietary acrylamide, a compound that may be associated with certain types of cancer, compared to deep-frying.

Air-Frying May Be Healthier Than Deep-Frying

They are lower in fat, calories and even some potentially harmful compounds that are found in traditionally fried foods.

If you’re looking to lose weight or lower your fat intake without modifying or cutting down on fried foods, switching to an air fryer may be a good choice.

However, keep in mind that just because it may be a better option than deep-frying doesn’t mean that it’s a great option when it comes to your overall health.

Summary Air-fried foods are lower in fat, calories and acrylamide than deep-fried foods, making them the healthier option. Nevertheless, these are still fried foods.

Although air-fried foods may be healthier than deep-fried foods, it’s important to remember that they are still fried foods.

A multitude of studies have shown that eating fried foods may be associated with numerous adverse effects on health.

For example, a study of 15,362 people found that eating more fried foods was associated with a greater risk of heart failure (13).

Other research has shown that regularly eating deep-fried foods may be associated with a higher risk of certain types of cancer, including prostate, lung and oral cancers (14, 15, 16).

Frequently eating fried foods has been associated with other conditions as well, such as type 2 diabetes and high blood pressure (17, 18).

While research on the effects of air-fried food specifically is limited, it’s recommended to cut your intake of all fried foods to help promote better health.

Instead, opt for healthier cooking methods, such as baking, roasting, steaming or sautéing, to boost flavor and avoid the negative health effects of fried foods.

Summary Although air-frying may be healthier than deep-frying, fried foods are still associated with many negative health effects, including heart failure, high blood pressure, diabetes and certain types of cancer.

Compared to deep-frying, using an air fryer can reduce the amount of fat, calories and potentially harmful compounds in your food.

However, air-fried foods are still fried foods and eating them on a regular basis may be associated with adverse health conditions.

Although air fryers may be a better alternative to deep fryers, limiting your intake of fried foods altogether is the best option when it comes to your health. 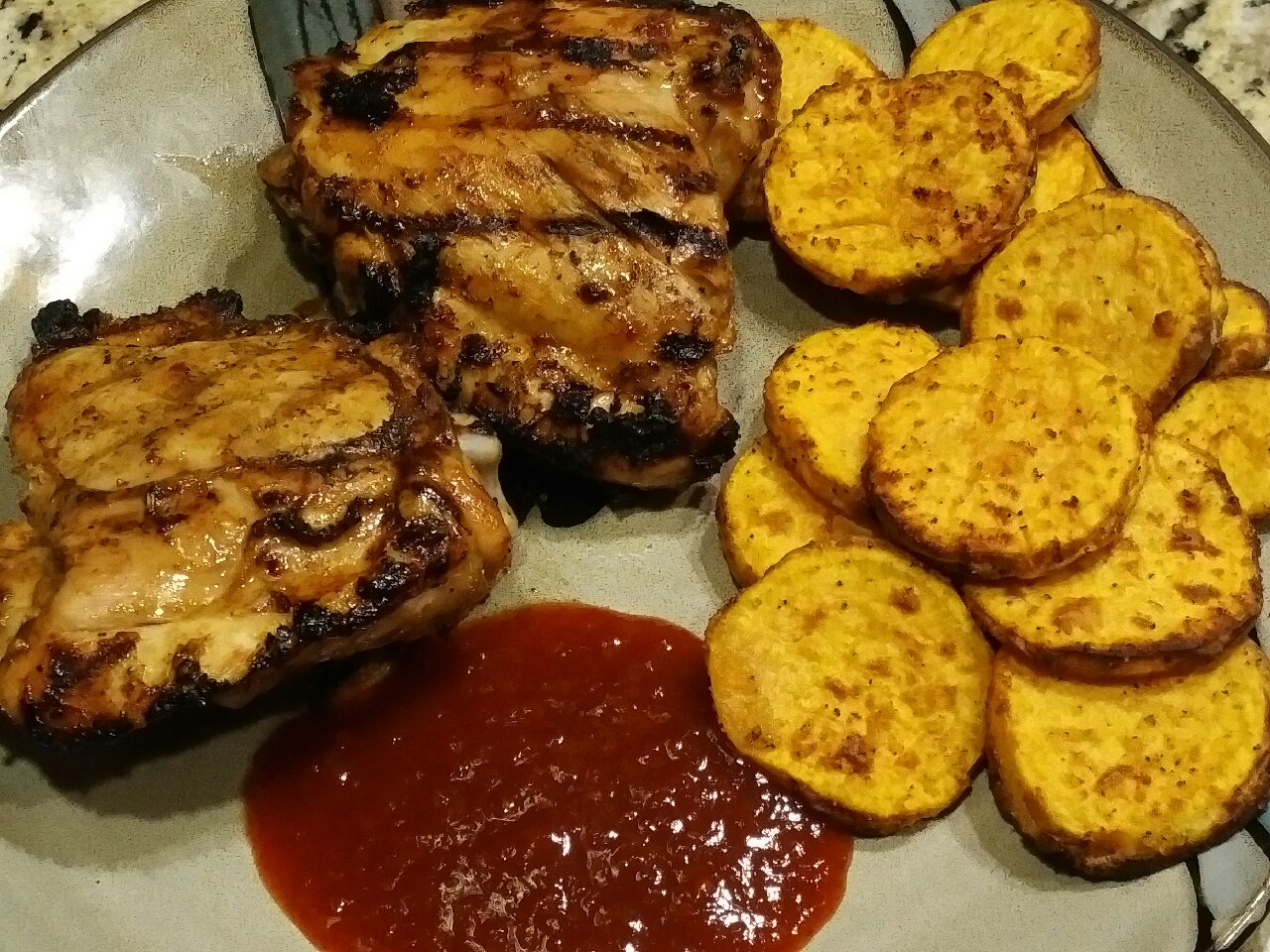 This small 60 calorie organic sweet potato is sliced a half inch thick and fills the air fryer basket with one layer for even frying.  If you pile up more than this, some slices will have a yam baked texture instead of a french fry texture.  Nobody sells organic sweet potato fries from an air fryer. You have to make them yourself.