EZ Diet Update January 19, 2017:  To be fair to Food for Life I just bought a loaf of Low Sodium Ezekiel 4:9 Bread (brown wrapper) to see if there has been any change in production. The Low Sodium is now as dense as the Sesame. I’m not seeing the holes in areas of the loaf that didn’t rise properly. 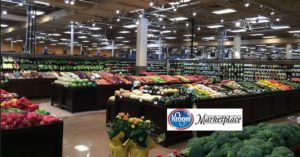 I just bought 2 loaves of Ezekiel 4:9 Sesame $3.49 each, 1 loaf of Ezekiel 4:9 Low Sodium $3.49 each, and a loaf of Cinnamon Raisin for $6.99 at Kroger Marketplace.  I’m very impressed with Kroger Marketplace and highly recommend the store as the leading source for one-stop Ezekiel Diet groceries.  They really seem to making an obvious effort to attract the better informed customers eating defensively.

There’s been a quality control problem at Food for Life in the Ezekiel 4:9 Low Sodium bread (brown wrapper) for some time, actually off and on for years. It’s not as dense as it should be, especially at almost thirty-two cents a slice when you pay full retail price.

It looks like the dough is packed dense across the bottom inch and up the right side of a defective slice.  It’s not rising properly.  This has been going on a long time.  Many slices are missing enough dough to fall into two pieces.

Butter and Coconut Oil melts and runs right through it. I consistently see a white layer of coconut oil on my breakfast plate where it ran right through the toast to the plate. Same with butter.  A huge waste adding even more to the cost per slice.

I’ve decided to stop buying the Ezekiel 4:9 Low Sodium bread and switch to the Sesame Ezekiel 4:9 bread until they can get this problem solved. You might want to do the same.

I’m also counting 19 slices instead of 20 now. To be fair to Food for Life, this could be an anomaly, because I also counted 21 on a loaf of Cinnamon Raisin. At up to $5.99 a loaf that brings the price per slice (if 19 slices is correct) to almost thirty-two cents with tax. Almost seven cents more per slice with less bread dough since the last time I ran the numbers. You can shop and find it for $4.99 (sometimes less) or on sale for like $3.99 if you buy several loaves (like Kroger Marketplace) and bring the price back down to twenty-five cents. Dropping a slice from 20 to 19 adds 1.3 cent per slice like an inflation tax.

This diet only calls for less than $1 a day for Ezekiel 4:9 Bread from Food for Life. It’s not a big deal. Buying it from Food for Life is certainly a better option than trying to make a couple loaves of sprouted grain Ezekiel bread a week. It’s just currently you get more value using the Sesame Bread because of this Low Sodium production issue.

The Sesame Ezekiel 4:9 Bread (green wrapper) is consistently more dense, more filling, and a much better value.  The 80 mg of sodium per slice is from sea salt so it’s not quite as bad as regular white table salt. Just add the 240 mg of sodium extra a day for 3 slices. The Low Sodium (actually no-sodium) works better for rapid weight loss and when you’re watching sodium.

The Cinnamon Raisin is still a valid choice for breakfast, or a snack, and a change occasionally to guard against bread food fatigue.