How to Store and Prepare Frozen Ezekiel 4:9 Bread

If you’re new to eating frozen Ezekiel 4:9 Bread from Food for Life let me give you some “how to” advice. It’s frozen to keep it fresh longer, and because it’s not full of preservatives found in most bread.

For several years I kept it frozen and wrestled a piece off as needed and put it back in the freezer. That works, but some loaves will have more moisture than others and will be frozen solid. You’ll break slices trying to pry one off.

That’s not the best way, and the instructions on the bag say to keep it frozen until you’re ready to use it, then let it thaw in the refrigerator.  But who reads instructions.  : ) Today, I always pull a loaf out of the freezer and keep it in the fridge until it’s used up.

Just lightly toast it to preserve the sprouted grain nutrients.

Also see:  Why Ezekiel Bread is the Healthiest Bread You Can Eat

Another trick, when traveling use a loaf of frozen Ezekiel Bread in a cooler in place of ice. Because you can’t find healthy bread while on the road, I almost always travel with Ezekiel Bread, butter, and organic jelly. Or I’ll buy it once at my destination and keep it in a hotel room fridge.  I’ll buy a small tub of Land of Lakes Butter, Olive Oil, and Sea Salt for convenience and let it sit out on the counter, or hotel room in a small fridge until used. Most hotels have a breakfast area off the lobby with toasters. I’ll put a couple slices in a plastic shopping bag with the butter and jelly and go to the breakfast area to toast it.  I’ve also been known to travel with a cheap $10 toaster and eliminate the trip to the lobby.

The older I get the less I care about what others think. Especially when 70%+ of them (and that’s trying to be kind because it’s really 90%+) are deceived, asleep, fat, sick, and dying prematurely. However, the comments from others in the hotel breakfast area in the morning if I show up  with a whole loaf of Ezekiel Bread and my own clean butter and jelly is, “that’s smart”, or “I never thought about doing that”. While they’re eating highly processed HFCS white or wheat bread or baggles probably GMO, mystery waffle dough, microwaved nutrient void eggs, GMO wheat biscuits, and HFCS-MSG-GMO wheat, corn or soy cereal (probably glyphosate coated), covered with highly processed cow body fluids.

Here’s another hot tip, Kroger Marketplace consistently has the lowest price (sales) on Ezekiel Bread. I’ve seen it as low as $3.99 a loaf (normally $5+). Because it’s frozen I stock up and buy 4 or 5 loaves at a time.

Ezekiel Bread also makes a great work snack. All you need is a $10 toaster, butter, and jelly.  I sometimes skip a meal with the 400 calorie powerhouse of nutrients below.  This is also the perfect meal to seed with the best probiotic you can afford. 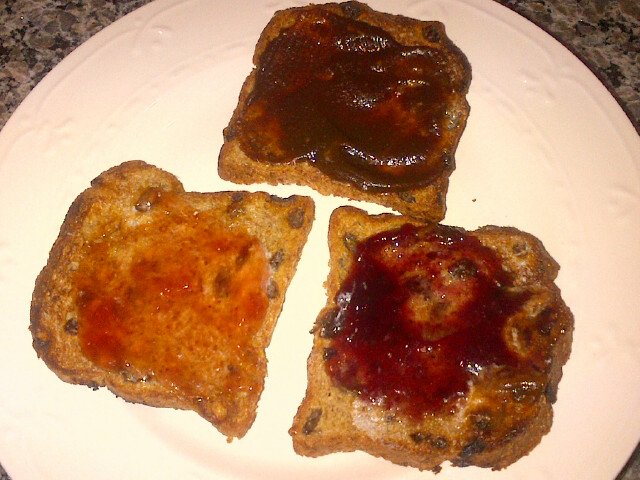 By the way, I’ve said it before but it’s worth repeating, I have no connection to Food for Life. The opinions expressed here on this blog are not necessarily the views of the owners, management, or staff of Food for Life, or any other product recommended on this site. They’re the opinions of the contributing authors.