EZ Diet Note: I just spotted the first Florida Ruby Red Grapefruit harvest at Costco 10/13/2018.  This is a good week earlier than I normally see the first fresh harvested bright ruby red Florida grapefruit.  I just had one and they’re delicious.

September and October are the months when we’re between grapefruit harvests. Most grapefruit available at the grocery store during this period of time have been in cold storage for weeks or months. A good quarter or third of them already have seeds sprouting or drying up inside or just plain spoiled.

It’s hard to gauge old grapefruit in the store because those on display will still be firm from being almost frozen.  You get them home and discover they’re much older than you thought.

However, the first harvest of grapefruit in grocery stores in October are picked early so they’re fresh, but some can be tough. This year’s crop at Costco are perfect. I always slice out the tough chewy center core when I’m slicing one for breakfast. Notice in the picture below how I’ve notched out the center core before cutting into slices. The sliced out core is to the top right side of the knife. 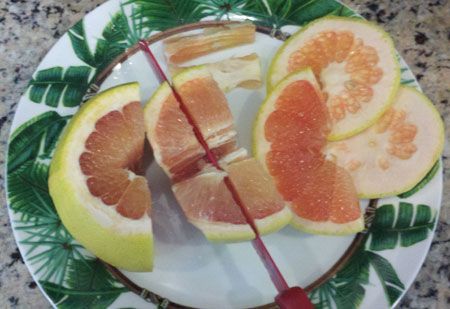 To cut a grapefruit this way slice the top and bottom 3/4 inch cap off. Then stand on one cut end and slice right down the center into two halves. Then flip the half side up and cut into three slices per half.  The natural tendency is to lay the grapefruit on the cut side and slice from the back round side.  Don’t do this because the knife can slip left or right on a soft grapefruit and slice a finger open. The worst knife cut I’ve ever self-inflicted happened this way. Now I always start the knife into the cut side of the fruit (as pictured above) once the knife is sliced into the fruit it’s not going anywhere but down. 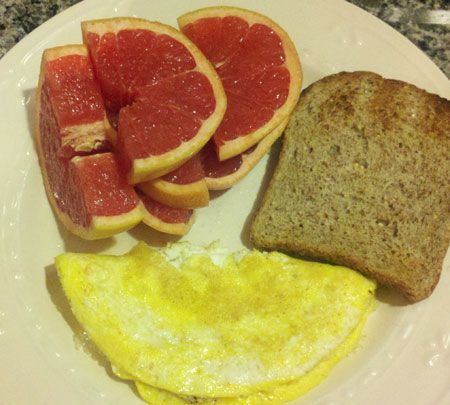 The picture above is what the first harvest ruby red Florida grapefruit look like. Notice the chewy center core was notched out here as well.  Another benefit of slicing the center core out is that’s where the seeds are. Once sliced out, the seeds just fall out.

Why make such a big deal about grapefruit?  Good question, read the following article.

by: S. L. Baker, features writer as seen at NaturalNews.com

(NaturalNews) Big Pharma has been doggedly searching for drugs that target a group of nuclear receptor proteins in the human body known by the long title of peroxisome proliferator-activated receptors (PPARs, for short). The reason? PPARs regulate the expression of genes that are involved in fat and carbohydrate metabolism, among other functions — so the theory is that if drugs could control PPARs, the medications would treat diabetes, high cholesterol and even maybe obesity.

But it turns out there’s already a substance that could do all this. And it’s not a side effect-laden chemical. It’s a compound in grapefruit.

Bottom line: there’s extremely sweet breaking news about a compound hidden in the tangy flavor of grapefruits that may treat diabetes naturally and also bring some of the benefits of low carb dieting to the body, too — without dieting. Scientists from the Hebrew University of Jerusalem and Massachusetts General Hospital (MGH), have discovered that naringenin, an antioxidant derived from the bitter flavor of grapefruits and other citrus fruits, triggers the liver to break down fat.

While the function of the pancreas is important to diabetics, the liver is the main organ responsible for the regulation of carbohydrates and blood levels of fat. After a meal, the blood is flushed with sugars, which activate LXR-alpha, a PPAR associated with inflammation. This triggers the liver to create fatty acids for long-term storage. But during periods of fasting (and low carb dieting) the process is reversed, fat cells release fatty acids and break them down to ketones. There’s an increased sensitivity to insulin, too. The new research, just published in the online journal PLoS ONE, shows that naringenin activates two kinds of PPARs (dubbed PPAR-alpha and PPARy) and blocks LXR-alpha — resulting in fasting-type benefits to the body.

“It is a process which is similar to the Atkins diet, without many of the side effects,” Martin L. Yarmush, MD, PhD, director of the MGH Center for Engineering in Medicine and one of the paper’s authors, said in a media statement. “The liver behaves as if fasting, breaking down fatty acids instead of carbohydrates.”

“It is a fascinating find,” Yaakov Nahmias, PhD, the paper’s senior author said in the press statement. He pointed out that the results of the research were what the pharmaceutical industry has long been seeking through drug research.

“But their (drug) development was plagued by safety concerns. Remarkably, naringenin is a dietary supplement with a clear safety record. Evidence suggests it might actually protect the liver from damage,” Dr. Nahmias added. If the results of the new study hold up in human patients, the research team believes the grapefruit compound could become a treatment for high cholesterol, type-2 diabetes, and metabolic syndrome.