Ezekiel Diet Note:  This is an absolutely perfect example of how the spoken word can program this matrix we live in. Be careful what you say and what others around you are manifesting.  It works for Satan who comes to kill, steal and destroy just like it works for good through Jesus Christ. Famous last words of Joseph Rosenbaum before he is shot in the head in self defense by Kyle Rittenhouse. It’s also a perfect example of how God prefers to manifest Himself through the most unlikely people, like Kyle Rittenhouse.  If that’s what happened here. It certainly appears as though Kyle had protection and did everything by the book as classic self defense in a life threatening situation.  Multiple people were also in place filming it; who probably believed it would prove he was a white supremacist killer. I’d like to know more about Kyle’s faith, or maybe who was at home praying for him.

Isn’t it interesting that the black guy filming in the next video is calling out to the police “hey this guy just shot 2 guys down here, get him police.” I thought they don’t want police protection?

These pictures below of Kyle Rittenhouse is what I mean by God using the most unlikely person. I’m sure people thought the same thing when David showed up King Saul and his worthless army when he killed Goliath with a slingshot.  This is Kyle Rittenhouse below, and the AR-15 is a powerful equalizer against a mob who doesn’t want to die for a $17 an hour paycheck. His online shootem up gaming experience came in handy. But that AR-15 was like turning the light on in a nasty kitchen full of cockroaches. RAID! I bet you money the police would prefer to see more Kyle Rittenhouses on the streets. It’s most likely why the police drove right past him after the gun fight when he was obviously trying to give himself up to police to sort out. 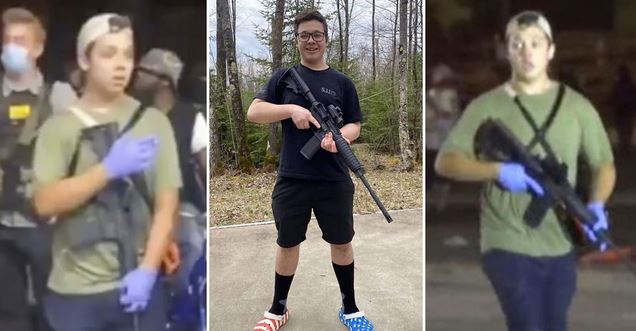 Goliath is described in the biblical Book of Samuel as a Philistine giant defeated by the young David in single combat. The story signified Saul’s unfitness to rule, as Saul himself should have fought for Israel. Can we see any parallels today?