If you’ve been following this blog, you know I’ve experimented with simple cheesecake recipes that only use a few ingredients, for ways to make it as good or better, with less calories. Recently I’ve been able to squeeze even more calories out of the skinny cheesecake pie and make it more tasty. I’ve reduced the calories to about the same as a nutrition bar. The slice pictured above is 138 calories, with about 25 calories in walnut topping, plus add 30 calories in whipped cream, total 193 calories. Here’s how I did it….

Of course, when it comes to cheesecake the majority of the calories are in the cream cheese. One way I’ve already employed to reduce the calories was to use the 1/3 Less Fat Cream Cheese with 560 calories instead of 799 calories for the full fat version. The original cheesecake recipe calls for 2 – 8 oz. blocks, so we have almost 1,600 calories (799 x 2) immediately using the full fat version. Cutting some of the fat by using the 1/3 fat cream cheese brings us back down to just 1,120 calories (560 x 2) per pie.

My first experiment in reducing calories was to make two thinner pies, this would split the 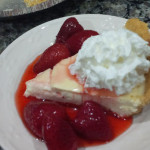 calories in two, and give me twice the pie with half the calories per slice. However, I wasn’t sure one 8 ounce block of cream cheese was enough bulk for one pie, so I bumped everything by 1/3, and used 3 – 8 oz blocks of cream cheese and an extra egg, more Stevia, and vanilla extract, and lemon juice.

See that recipe: Skinny Cheesecake with Stevia Recipe for 2 pies. 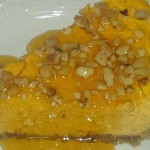 one day I wondered what the Skinny Cheesecake recipe would taste like if I added a can of Libby’s 100% Pumpkin (175 calories for whole can, makes 2 pies). That was pretty good too, but I recognized it beefed the pie back up thicker and with more calories, not less. Also, it wasn’t quite sweet enough with all that extra bulk, I solved that problem by drizzling a little organic maple syrup on the pie before adding the whipped cream topping.

See that pie chronicle at: Skinny Pumpkin Cheesecake Pie with Stevia for 2 pies

Then it occurred to me that I could possibly cut back to just one block of 1/3 less fat cream cheese (560 calories) and a half can of 100% Libby’s pumpkin (90 calories) for the bulk mix of one thinner pie. So I tried it.  The result is the big picture above. Slightly thinner. But wow, it was so good I thought I should document how I did it in a blog post before I forgot exactly how I did it.

Here’s how I did it.

One area I was able to cut the calories in half was in pie crust. A standard processed graham cracker crust is 800+ calories of wheat and sugar. It added over a 100 calories to even a small piece of pie.  A half cup of almond meal is only 360 calories, plus a half tablespoon of melted butter for 50 calories, (410 calories total) and a couple teaspoons of pumpkin pie spice, is now my standard low calorie dessert pie crust. It only takes a couple minutes to make using the instructions below. However, an alternative to the almond meal butter crust is the almond meal and medjool dates crust.

For this Skinnier Cheesecake Crust I used:

In a small food processor Grind up almond meal, medjool dates, and spices well into a meal, makes 2 pie crusts. I dish it out in one heaping spoonful at a time to add it evenly around 2 buttered pie pans. Spread into place with a fork. Tamp down lightly, not smash-packed.  I then spray the pie crust with olive oil and put in the 350 degree pre-heating oven for just a few minutes

Total Calories 630 for 2 pie crusts, call it 325 total calories per pie crust w buttered pan and olive oil spray. This gets me down to just 40 calories for a small slice, and about 54 for a large slice of pie. Less than half the calories from a graham cracker crust.

2 cups of Stevia in the Raw, or 4 tablespoons uncut SweetLeaf Stevia

In a large bowl or stand mixer, beat cream cheese and Stevia, egg, lemon juice, and vanilla, until combined. Beat until smooth and well combined, scrapping down the sides in between. Pour in the crust pie pan and smooth out by twirling pan using a spatula to move the mix into place. Bake at 350 degrees F for 25 to 30 minutes. Take out, add walnut topping, tap in, let cool, chill for 4 to 6 hours.

Add walnut topping when it comes out of the oven optional. Adds about 25 calories per small slice, and 33 calories per large slice.

Consider a 1/6th small slice of this cheesecake with walnut topping and whipped cream at 193 calories. Less than most nutrition bars, and a fraction of the price.