Herbs to treat inflammation: The 10 most powerful natural medicines that really work 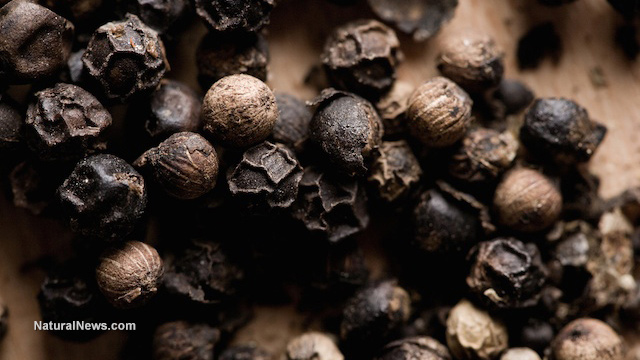 By: Aurora Geib – as seen at NaturalNews.com

(NaturalNews) Oftentimes, the knee-jerk reaction of the medical community to inflammation is to dole out drugs to reduce it. In fact, there is a whole classification of non-steroidal anti-inflammatory drugs, or NSAIDs, available by prescription and over-the-counter. NSAIDs are associated with a variety of risks, according to new labeling by the U.S. Food and Drug Administration (1), including an increased risk for cardiovascular events like heart attack and stroke.

Fortunately, you can use herbs for inflammation instead of dangerous drugs.

#1 Black Pepper
People refer to black pepper as the King of Spices because of its intoxicating, rich aroma and complex flavor. Black pepper owes its distinctive pungent flavor to piperine, which also provides an astonishing anti-inflammatory effect. Piperine inhibits the expression of a gene associated with arthritis and the spread of cancer, MMP13. Even at low doses, piperine reduces inflammation by depressing prostaglandin production. Furthermore, piperine significantly suppresses the perception of pain (2) and arthritis symptoms while decreasing inflammation in joints.

#2 Cardamom
As the Queen of Spices, cardamom also reduces inflammation. Part of the ginger family, cardamom is native to India and Sri Lanka; healers there have used cardamom to reduce inflammation for centuries.

#3 Cayenne
Cayenne pepper contains capsaicin. Exposure to capsaicin causes body tissues to release substance P, which your body usually releases immediately after tissue damage. Capsaicin does not actually damage tissue — this chemical only tricks your body into acting as if damage had occurred.

Repeated exposure of one part of your body to capsaicin will deplete that area of its substance P, which increases tolerance to capsaicin in people who regularly eat hot peppers.

Reducing substance P in one area of your body also decreases your sense of pain in that part. Capsaicin cream products take advantage of this effect to reduce arthritis pain in joints and other sources of chronic pain. Best of all, the capsaicin in cayenne pepper can help protect your stomach (3) from ulcers associated with NSAID use.

#5 Ginger
Traditional medicine has relied on ginger’s anti-inflammatory powers for centuries. According to the University of Maryland Medical Center (4), there is also evidence that ginger eases pain associated with that classic inflammatory disease, arthritis. Additionally, ginger eases stomach upset, nausea and vomiting.

The active ingredient in turmeric, curcumin, is an antioxidant that removes dangerous free radicals from the body. Free radicals cause cell damage that leads to inflammation, including damage to cell membranes, negatively affect DNA and cause cells to die. Additionally, turmeric lowers two types of enzymes known to cause inflammation.

#7 Aloe
Aloe not only reduces inflammation but also eases pain and promotes skin repair and healing. According to the University of Maryland Medical Center, the anti-inflammatory effects of aloe gel are superior to 1 percent hydrocortisone cream.

#8 Celery seed
Celery seed works to reduce inflammation by acting as a diuretic, which means it helps the body get rid of excess fluid by increasing urine output. Celery seed is especially effective in treating inflammation caused by arthritis and gout, a type of arthritis.

#9 Green tea
Green tea contains polyphenols, micronutrients that work in the body to prevent certain disease mechanisms — such as inflammation — from happening. The main polyphenol in green tea is epigallocatechin gallate, or EGCG. Together, EGCG and the other polyphenols in green tea have anti-inflammatory and anticancer properties.

The next time you struggle with inflammation or the medical conditions caused by inflammation, try using an herbal remedy before resorting to dangerous drugs and chemicals. Herbs are highly effective in reducing inflammation and carry relatively low risks for complications.