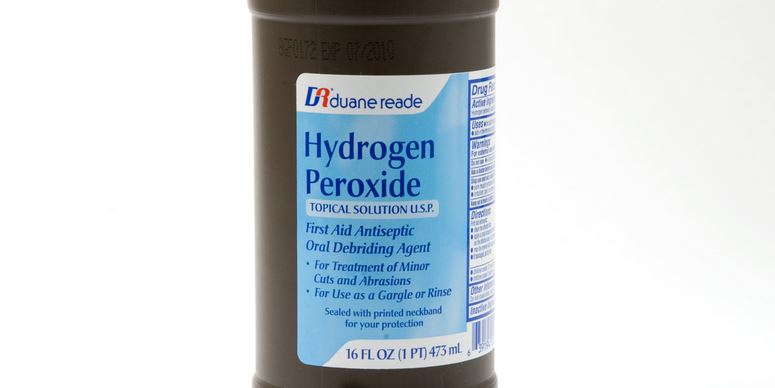 Guest Writer for Wake Up World

Hydrogen peroxide (H2O2) is the only germicidal agent composed only of water and oxygen. Like ozone, it kills disease organisms by oxidation! For this reason, Hydrogen peroxide is considered the world’s safest all natural effective sanitizer.

Hydrogen peroxide kills microorganisms by oxidizing them, which can be best described as a controlled burning process. When Hydrogen peroxide reacts with organic material it breaks down into oxygen and water, meaning it is non-toxic for general use.

Soak any infections or cuts in 3% for five to ten minutes several times a day. Even gangrene that would not heal with any medicine has been healed by soaking in Hydrogen peroxide. Put half a bottle of hydrogen peroxide in your bath to help rid boils, fungus or other skin infections.

Use about 2 quarts 3% Hydrogen peroxide to a tub of warm water. Soak at least 1/2 hour, adding hot water as needed to maintain a comfortable water temperature.

To cure a foot fungus, simply spray a 50/50 mixture of Hydrogen peroxide and water on them (especially the toes) every night and let dry.

Patients infected by tiny mites report that hydrogen peroxide effectively kills the mites on their skins. They spray it on their skin a couple of times (with a few minutes in between the applications) with amazing results.

Some sources recommend soaking wounds for five to ten minutes several times a day. However, washing and rinsing action is sufficient. You shouldn’t leave the solution on open tissue for extended periods of time as, like many oxidative antiseptics, Hydrogen peroxide causes mild damage to tissue in open wounds. Therefore it is important to use with caution.

Many people don’t realize that hydrogen peroxide makes a very effective and inexpensive mouthwash. Take one capful (the little white cap that comes with the bottle) and hold in your mouth for 10 minutes daily, then spit it out. You will not have canker sores and your teeth will be whiter. Use 3% H2O2 – add a dash of liquid chlorophyll for flavoring if desired.

Or, just dip your brush in 3% H202 and brush. Soak your toothbrush in Hydrogen peroxide to keep them free of germs.

Hydrogen peroxide is not a pain killer; however, as an anti-viral, antibacterial and anti-fungal agent, it is effective at treating the pathogen that is causing the infection. The following is from my own personal experience: My dentist wanted to give me a root canal some time ago as one tooth was inflamed and, in her opinion, would die. I felt some discomfort but told her that I would give it chance to heal. I rinsed with hydrogen peroxide (several times a day) as well ascoconut oil (once a day). The discomfort went away and I have had no further problems with the tooth.

If you have a terrible toothache and cannot get to a dentist right away, put a capful of 3% Hydrogen peroxide into your mouth and hold it for 10 minutes several times a day. The pain will lessen greatly.

Having used 3% Hydrogen peroxide as a mouth wash for sometime ago, I am thrilled to note that my teeth have been beautifully and effortlessly whitened. I used to pay so much for professional whitening, those silly strips and uncomfortable trays. Live and learn.

Add 2 capfuls of 3% Hydrogen peroxide in warm distilled water once to twice a week to remove even chronic yeast infections.

Peroxide is a bleaching agent and is used for lightened hair. Dilute 3% Hydrogen peroxide with water (50 / 50) and spray the solution on your wet hair after a shower and comb it through. You will not have the peroxide burnt blonde hair like the hair dye packages, but more natural highlights if your hair is a light brown, faddish, or dirty blonde. It also lightens gradually so it’s not a drastic change.

Hydrogen peroxide is used as a disinfectant in CIBA Vision’s Clear Care no rub contact lens cleaning solution, due to its ability to break down the proteins that build up on the lense from the eye’s immune response, resulting in increased comfort for those with sensitive eyes.

To disinfect your dishwasher, add 2 oz. of 3% Hydrogen peroxide to your regular washing formula.

Clean your counters and table tops with hydrogen peroxide to kill germs and leave a fresh smell. Simply put a little on your dishrag when you wipe, or spray it on the counters.

Fill a spray bottle with a 50/50 mixture of 3% Hydrogen peroxide and water and keep it in every bathroom to disinfect without harming your septic system like bleach or most other disinfectants will. After rinsing off your wooden cutting board, pour or spray hydrogen peroxide (and then vinegar) on it to kill salmonella and other bacteria.

Keep a spray bottle of 3% (straight) to disinfect the interior of the refrigerator and kids’ school lunch boxes. You can also use hydrogen peroxide to clean glass and mirrors with no smearing. Use it in the bathroom to sanitize the counters, toilets, floors, etc.

Directions: It is best to use two spray bottles rather than mixing the solutions together. Put straight vinegar in one and straight Hydrogen peroxide in the other spray bottle. When you want to sanitize a surface (cutting board, counters, sink, cages, toys, toilets, floors, etc.) spray one mixture on the surface, then the other. When they mix, for a brief time the chemical action of the two make a very powerful sanitizer. You can rinse off the surface afterwards. This applies for kitchen surfaces as well as vegetable and food decontamination.

To clear the air, use 1 pint 3% hydrogen peroxide to 1 gallon of water in a humidifier or steamer.

You can also add a cup of hydrogen peroxide instead of bleach to a load of whites in your laundry to whiten them. If there is blood on clothing, pour directly on the soiled spot. Let it sit for a minute, then rub it and rinse with cold water. Repeat if necessary.

Peroxide is a perfect alternate solution to keep those clothes white. Also, when chlorinating clothes, they tend to wear out faster – peroxide won’t do that.

3% Hydrogen peroxide is an effective stain remove if it is used fairly soon after a spill – although blood stains as old as 2 days have been successfully lifted with Hydrogen Peroxide. If a little peroxide is poured onto the stain it will bubble up in the area of the blood, due to a reaction with catalase. After a few minutes the excess liquid can be wiped up with a cloth or paper towel and the stain will be gone.

3% H2O2 must be applied to clothing before blood stains can be accidentally “set” with heated water. Cold water and soap are then used to remove the peroxide treated blood.

Please note: Hydrogen peroxide will bleach or discolor many fabrics.

Combination of vinegar and hydrogen peroxide make a cheap, effective and non-toxic disinfectant agent and is said to be more effective at killing pathogens than bleach. As it is non-toxic, you can use it to cleanse cooking and food preparation areas (as well as fruits and vegetables – see #24). In tests run at Virginia Polytechnic Institute and State University, pairing Vinegar and Hydrogen Peroxide mists, kills virtually all Salmonella, Shigella, or E. coli bacteria on heavily contaminated food and surfaces.

If time is a problem, spray vegetables (and fruits) with a solution of 3%. Let stand for a few minutes, rinse and dry.

You can also use it to rinse off your meat before cooking.

To help keep leftover salads, spray with a solution of 1/2 cup water and 1 Tbsp. 5%. Drain, cover and refrigerate.

Place meat, fish or poultry in a casserole (avoid using aluminium pans). Cover with a dilute solution of equal parts of water and 3% H202. Place loosely covered in refrigerator for 1/2 hour. Rinse and cook.

A) 3.5% Pharmaceutical Grade: This is the grade sold at your local drugstore or supermarket. This product is not recommended for internal use. It contains an assortment of stabilizers which shouldn’t be ingested. Various stabilizers include: acetanilide, phenol, sodium stanate and tertrasodium phosphate.

B) 6% Beautician Grade: This is used in beauty shops to color hair and is not recommended for internal use.

C) 30% Reagent Grade: This is used for various scientific experimentation and also contains stabilizers. It is also not for internal use.

D) 30% to 32% Electronic Grade: This is used to clean electronic parts and not for internal use.

E) 35% Technical Grade: This is a more concentrated product than the Reagent Grade and differs slightly in that phosphorus is added to help neutralize any chlorine from the water used to dilute it.

F) 35% Food Grade: This is used in the production of foods like cheese, eggs, and whey-containing products. It is also sprayed on the foil lining of aseptic packages containing fruit juices and milk products. THIS IS THE ONLY GRADE RECOMMENDED FOR INTERNAL USE.

G) 90%: This is used as an oxygen source for rocket fuel.